How They Live...: Henriette and Wolfgang Heichel 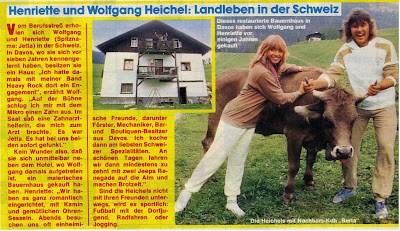 It seems I have now learned how to size images a little better, so hopefully this will become a little more visually appealing and less WOAH MONSTER PICTURES EVERYWHERE D:

Tonight's subject is the lovely Henriette "Jette" Heichel, and her husband, Wolfgang.

Wolfgang and Henriette (nickname "Jette") recover from occupational stress in Switzerland. They own a house in Davos, where they first met seven years ago:

"I had then with my band Heavy Rock an engagement there," explains Wolfgang. "On the stage, I knocked a tooth out with the microphone. In the hall sat a dental assisstant, who took me to a doctor. It was Jette. It sparked both of us at once." [Trans: We were both interested in each other at once?]

Small wonder, then, that they bought a picturesque farmhouse right next to the hotel where Wolfgang was performing at the time.

Henriette: "We have a very romantic interior, with a fireplace and cozy wing chairs. In the evenings, local friends often visit us, including a forester, mechanics, bar and boutique-owners from Davos. I cook them my favourite Swiss specialties. On nice days, we go with at least ten people in two Jeep Renegades, down to the pasture and make snacks."

When the Heichels are not on the road with their friends, they are very athletic: Football with the local youth, cycling, or jogging.
Posted by QueensJenn at 6:53 PM